Charles Wallace Parker was born in Griggsville, Illinois in 1864.  At the age of five, his family moved to Abilene, Kansas.  As Parker grew into adulthood, he became interested in creating and operating amusement devices as a career.  After saving his earnings as a janitor, Parker bought a portable shooting gallery.  He traveled the area with the device, and after some time, decided that he could improve the design.  Parker soon built his own shooting gallery, thus beginning his career in manufacturing amusement devices.

Soon Parker would be building carousels as well.  As the story goes, Parker and his daughter were headed towards the general store one afternoon.  Parker had one dollar in his pocket to buy the family’s groceries.  Suddenly, his daughter noticed a carousel offering rides for a nickel.  After much pleading from his daughter, Parker paid for his daughter to ride the contraption.  His daughter did not stop riding until Parker had spent eighty-five cents, leaving only fifteen cents to pay for the family’s groceries.   Seeing that the excitement of a carousel could get him to spend most of his last dollar, Parker decided he should be in the carousel business.  After saving enough money to make the purchase, Parker bought a portable carousel.  Similar to his ideas concerning his shooting gallery, Parker decided that he could build carousels in superior ways.  Parker built his first carousel in 1892, and started the Parker Carnival Supply Company two years later.
In 1896, the company became the C.W. Parker Amusement Company.  Over the years, Parker’s company produced all sorts of amusement devices including shooting galleries, Ferris wheels, and other carnival equipment.  While Parker did produce this wide range of devices, he was best known for his carousels.
At the time of his company’s beginning, Parker was the only carousel manufacturer not operating on the east coast.  Most of Parker’s early carousels, or “Carry-Us-Alls” as he named them, were built to be portable.  Generally speaking, every carousel had interchangeable parts, so replacement parts were easy to acquire.
Parker’s business lasted in Abilene until 1911.  At this time, Parker got into a dispute over property lines with the city.  Rather than continuing to dispute, Parker decided to move his entire company to Leavenworth, Kansas instead.  While in Leavenworth, Parker made visible changes to his carousel designs.  The horses became more grandiose and other animals were featured as mounts. 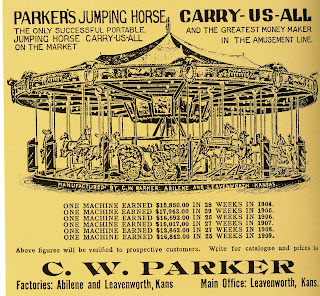 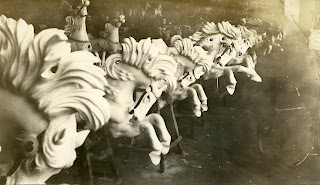 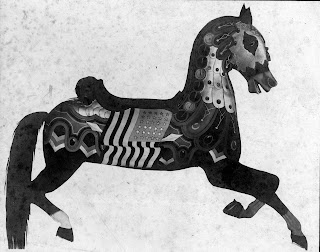 World War I caused a shortage of supplies for carousel manufacturers.  Following the war, the Great Depression greatly hurt the business, as fewer and fewer patrons had enough money to visit a carnival.  The carousel manufacturers that survived were those that switched to wood carving machines, or to aluminum horses (which required little to no maintenance).  Parker’s company was one of those that endured.  After Parker’s death in 1932, his son ran the company in Leavenworth until 1955. 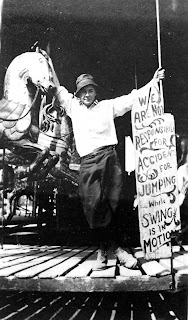 For his time, Parker was a huge name in the amusement business, earning him the nickname of the “Amusement King.”  A number of his carousels still exist today, at least sixteen in operating condition.  Two museums in Kansas feature the story of C.W. Parker and his carousels.  The C.W. Parker Carousel Museum in Leavenworth features a number of carousels, two of which can be ridden.  The Dickinson County Heritage Center in Abilene features a 1901 Parker carousel that is known to be the oldest Parker carousel that can be ridden.
All photographs in this post are courtesy of the Dickinson County Historical Society.
Posted by Unknown at 12:01 PM